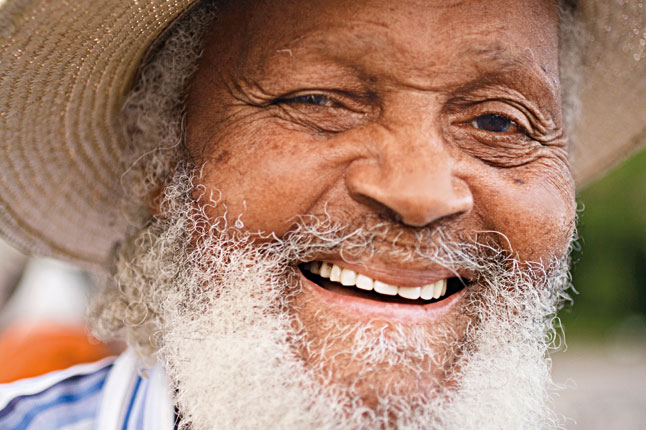 Johnny Barnes was known for waving and saying “I love you, God loves you,” to passing commuters during the morning rush hour into Hamilton.

Johnny Barnes (born John James Randolf Adolphus Mills, June 23, 1923 – July 9, 2016) was a Bermudian native found waving to passing traffic at the Foot of the Lane roundabout in Hamilton, Bermuda, from roughly 3:45 am to 10 am, every workday, rain or shine. A Bermuda institution mentioned in several guidebooks and profiled in a documentary film, he was known for waving and saying “I love you, God loves you,” to passing commuters during the morning rush hour into Hamilton. Due to the unique layout of the island and its roads, nearly all drivers at rush hour coming from the western and southern areas of the island passed Barnes at the roundabout.

Barnes, born to parents from St. Kitts, was an electrician by trade and worked on the Bermuda Railroad as an electrician until the railroad closed in 1948. He then became a bus driver. Barnes was fond of waving to people while driving the bus, and would occasionally sit and wave to people on his breaks or when coming to work.

One day in approximately 1986, Barnes stopped at the Crow Lane roundabout and took up waving to traffic. He was there almost every day, until his “retirement” in December 2015.Local radio stations report receiving frantic calls when Barnes was not at his unofficial post. He was occasionally joined by people, sometimes costumed, waving signs to promote a charity, event, or business.

In the 2011 short-subject documentary Mr. Happy Man, Barnes identified himself as a religious man, a Seventh-Day Adventist who was motivated to share God’s love for everyone. Though Barnes would pray with visitors to his post if requested, he was not known as a religious proselytizer.

In November 1998, a group of local businessmen unveiled a life-size bronze statue of Barnes blowing kisses in the air. The statue is located on Crow Lane just up from the roundabout. Although there were objections to spending $70,000 to build a statue to a man still living, Barnes said in Mr. Happy Man that he appreciated the gesture while he was still alive, saying he would not be able to enjoy it after his passing.