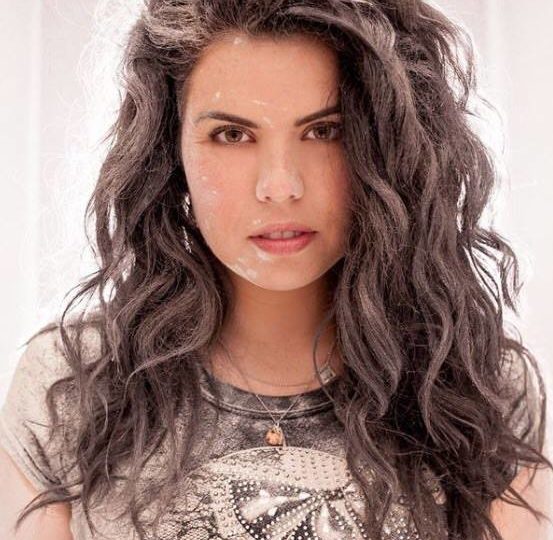 Mia is the lead singer for the alternative, rock/pop band Mohawk Radio.

“Anyone can stand up and sing somebody else’s song on X Factor but to write a song that strikes a chord with the world – for me, that’s incredible.” – Mia Page

It’s not where you’re from, as Ian Brown memorably observed, but where you’re at. As such, while the melting-pot lineup of Mohawk Radio crossed oceans to come together, the four members have a common mission. To be a band that matters. To write songs that resonate. “Anyone can stand up and sing somebody else’s song on X Factor,” notes Mia Page. “But to write a song that strikes a chord with the world – for me, that’s incredible…”

Mohawk Radio is what the world has been waiting for. In four meteoric years, the acclaimed alt-rockers have bloomed from cult heroes to hot-tip contenders. There have been incendiary sell-out shows across their native Manchester. Triumphs on stages as far-flung as Los Angeles, New Orleans and Bermuda. Victory in 2015’s hotly contested Rock The House competition. Now, with the Shoot From The Hip EP, comes confirmation that here, at last, is another great British rock band to hold close to your heart.

All the great rock ‘n’ roll ventures start with a pivotal meeting. Rewind the reels to June 2012, then, when Mia found herself on the rain-lashed streets of Manchester, having relocated from the sunkissed island territory of Bermuda. “Honestly, I came here because of The Stone Roses and Oasis,” she reflects. “I used to listen to Definitely Maybe on the beach. England has always been the forerunner in the music I’m interested in. So many iconic bands.”

It didn’t take her long to find kindred spirits, as that July, Mia replied to a post on a local musicians website from James Gregory. The guitarist and drummer Dave Quinn were already respected faces on the Manchester circuit, but lacked one vital component to make their band fly. “They were looking for a singer,” remembers Mia. “I was just off the banana boat. But I responded to the ad and met them. And we just had that chemistry, right from the start.”

Drinks at Manchester’s legendary Koffee Pot bar led swiftly to a debut rehearsal, where the lineup’s disparate influences fused into a sound that was fresh and thrilling. “I listen to more rock-slash-pop, and the boys listen to more indie-slash-metal,” says Mia. “Pantera’s Cowboys From Hell. The Bends by Radiohead. Jagged Little Pill by Alanis Morissette. We love a new band called Nothing But Thieves. Lana Del Rey. Arctic Monkeys. My biggest vocal artist influences are Robert Plant and Freddie Mercury. It’s a very eclectic mix.”

“But as soon as we all started playing together for the first time, it just hit home,” picks up James. “I can still remember it vividly. Mia’s voice just blew me away. It was staggering.”

Push your way to the security rail at a Mohawk Radio show and you’ll be struck by Mia’s somersaulting vocal and warrior-princess presence. Backed up by the fist-tight firepower of James, Dave and bassist Conor Marsh, it’s no surprise that the band have owned stages including the Etihad Stadium, Hyde Park and SXSW, nor that they beat off stiff competition at Rock The House. “For me,” says Mia, “I always wanted to be the kick-ass rock chick and blow everyone apart. I’m ferocious. Sometimes, I think people don’t want to like us – but they can’t help it. They think, ‘Oh, it’s a girl’, and decide all these things, but then they see us and think, ‘My God, these guys kick ass’.”

Those intense live shows are undoubtedly a vital part of Mohawk Radio’s rise. Yet the band have always understood that performance is nothing without songcraft. “I love the people that can write,” explains Mia. “Stevie Nicks, Debbie Harry, Janis Joplin, Dolly Parton, Alanis Morrisette. Of course, I love their voices, their iconicism. But most of all, it’s their writing. For us, writing original material is very important. It’s the most important.”

Right out of the blocks, Mia was true to that philosophy, arriving at Mohawk Radio’s first rehearsal with a batch of original songs. By 2014, they were firing on all cylinders, with the stellar material from debut EP Halfway To Heaven aired on prominent radio stations including BBC Manchester, Real Radio XS and Pure FM. Since then, the line-up has developed a rare creative telepathy, with the career-best songs on the Shoot From The Hip EP originated between the singer and guitarist, with the rhythm section adding the rocket-fuel and renowned producer Clint Murphy catching the sparks. “We have a really close bond,” says Mia, “and I think that shows in the music we make.”

Shoot From The Hip unveils five new songs that outrun the clichés and defy the rock-press pigeonholes. The sharp-elbowed alt-rock of lead single On Your Knees. The moody, electronica-laced anthemics of Get What You Deserve. The stalking, bass-driven Eyes Wide Shut. The glistening passive-aggression of Even. The heartbeat rhythms of Ready To Love. “As a band, we’ve really found our sound,” says Mia. “I think this EP is the first real showcase of it.” Never mind where they’re from. This is where Mohawk Radio are at. Stood on the brink of greatness. Armed with an EP that blows the cobwebs off the British rock scene. Ready to rock the hardcore and convert the uninitiated as they tour the planet throughout 2017. And above all, sworn to stake their claim as a band that truly matters. “Music is an addiction,” says Mia, “and there’s no cure for it. We are going to take this all the way…”

Cassine Shop – Natural beauty products, with a strong focus on the islands and oceans future – cassine.shop/pages/our-story

From Bermuda, Julia Frith has been swimming since she was a baby, she is trained with SSI, AIDA, and PureApnea as a freediver. She has worked as a mermaid in open ocean and aquarium tanks, and would spend much of her life underwater if she could. – juliafrith.com

Living in Bermuda, a shipwreck capital of the world, we were excited to finally head out with Blue Water Divers and freedive our first Bermuda shipwreck! Lying in 80 ft. of water – Julie Frith

“Down In Bermuda” Appeared On Jonathan Richman’s “Rockin’ & Romance” Album